Before get into my connection with Hospice,
I want to explain a bit of my back ground.

I was introduced Jikiden Reiki in 2006 March.  The seminar was only in
Japanese for Japanese people lived in BC.

In 2007, I took Shihankaku course (Level 1 teacher course) and it was again
in Japanese for Japanese people lived in BC.  I suggested my teacher Mr.Yamaguchi
that would he consider to do his seminar with English translation, and his answer was "Yes, if he could find an interpreter."

Without any proper translation training nor interpreter license, I jumped in
without a doubt. It would be a good thing to do to spread this wonderful teaching.
More stories --- Mission as a translator 1~3

Next year in 2008, we did our first Jikiden Reiki seminar in Vancouver with an
English translation for English speakers.

Then the year after in 2009, I took over the work to organize the entire seminar.

So, when I took over the position as an organizer, I started to think how could I use
this opportunity to bring the awareness of Jikiden Reiki to the public.

This is what I did to keep the connection with Chilliwack Hospice Society.

I arranged a Jikiden Reiki talk show for the people who didn't know about
the Jikiden Reiki, and people who couldn't attend Mr.Yamaguchi's seminar.
I was already too busy with the seminar arrangement, so I asked for help
from my friends to arrange this event. 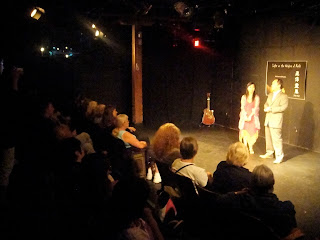 I wanted to gather 60 people. One of the reason I wanted to have
as many people as possible was so I could donate my portion of
the net profit to Chilliwack Hospice Society.

I invited Lucy and other people from the Chilliwack Hospice Society to
join this evening, so Lucy could receive the donation certificate at
the end of the event.

The event was held at Havana Restaurant on Commercial Drive in Vancouver
for $15/person.

People really enjoyed Mr.Yamaguchi's talk with opening/closing with a local singer
song writer,Rae Armour's songs with guitar.
(Which I don't have photos because I was on the stage,,,)

Towards the end, we mentioned about part the profit from this evening with Mr.Yamaguchi will be donated to Chilliwack Hospice Society.

What I believe about the Orbs on the photos is that when Orbs are in the photo,
spirits are confirming that people in the photos are on the right path and truly enjoying
the moments.


SO, this is the photo when we were just about giving the donation certificate
to Lucy the bunny lady who I met at the office of the Chilliwack Hospice Society.


When I saw this photo, I felt so good that spirits were also happy about what we
were doing ! (Such a bright orb showed up above Lucy's head ! )

I didn't know how much I could donate for the Chilliwack Hospice Society until
the evening was done, because I wasn't sure how many were coming.

It was about 35 people all together (with few people were invited with no cost) and
total donation cost was calculated after deducting the rent of the venue.

When I calculated the portion to give to Mr.Yamaguchi and gave an envelop of
his portion, I casually mentioned that all my portion would be going to
Chilliwack Hospice Society.

He looked at me with amaze, and said,

"Really? So, you don't receive any of the money from this event?"

I said,
" No. That's why I wanted to gather at least 60 people so I could donate more money.
But  I could only gather 35 people.... I think Chilliwack Hospice Society would be
happy with any amount though. "

Without any hesitation, Mr.Yamaguchi returned the envelope back to me and said,
"Add this to the donation."

I said,
"Oh, I didn't mean to ask you to give your portion as well."

He said,
"It is a good cause, and I would like to join to your idea."

It was a smaller amount than I was planning to, but it all went to
Chilliwack Hospice Society.

This was one of the way I kept the connection with Chilliwack Hospice Society
until the time I could donate my time.

My story of the Hospice society will be continued,,,,

Posted by Mari Okazaki at 12:19 No comments:

It was 2007 when I heard about Hospice Society in Chilliwack.

My life was VERY busy just by being a mom with 3 children, they were 1year old boy, 3 years old girl and 5 years old boy. Also I was already giving Reiki treatments daily bases, and teaching Jikiden Reiki classes about bi-monthly.


It was impossible for me to do any kind of volunteer work.


However, I really wanted to meet a lady who did a interview for my friend
at the Hospice.


I can't never forget the day when I met Lucy (who is now Executive Director at the Chilliwack Hospice Society).


I actually don't remember what I talked with her, but I do remember the first thing Lucy said to me even before we introduced each other.


In a very casual and friendly manner,
"Oh hi! Please be careful not to step on my rabbit when you have a seat. I am an animal lover and I have my bunny somewhere here. "

I LOVED it right away !


I was expecting the Hospice might be more serious environment, but meeting with Lucy
made me feel at home right from the beginning.


I found out that I would be able offer Reiki treatments for the Hospice patients, but
I would have to go through Hospice volunteer training. It would be 2 times a week for 5 weeks.

I wasn't sure if I could commit myself to even go through all the trainings,
but also volunteer work at that time of my life.

So, I decided to donate some money to the Hospice Society when I make extra money (well, it sounds like generous, but it was a small amount of money...) until I would be able to share my time as a volunteer.


That's all I could do at that time.

I kept in touch with Chilliwack Hospice Society for few years by donating small amount
of money here and there, but in 2009, I came up with an idea !


to be continued,,, to Hospice series 3

Posted by Mari Okazaki at 10:12 No comments:

Some of you might know I am now volunteering for Chilliwack Hospice Society.


Please, please take a moment to open this video clip. It is such a wonderful group.


I met Hospice, because of Reiki.


However, both Reiki and Hospice became to be a BIG part of my life now.

I learned Reiki, because I simply wanted to help my child who was suffering
with severe case of eczema. Then I got excited about Reiki, and pursued to
a Reiki teacher course and started to teach Reiki. Not knowing Reiki would
change my life completely.

This is my first introduction to the Chilliwack Hospice Society.
My friend was attending a ESL class and she had to interview with
a Hospice worker as part of a school project. Through the interview,
my friend heard that Hospice society offers energy healing sessions for
their clients.

She thought I would be interested in knowing what Hospice Society is
offering because of my deep passion for Reiki, which is a form of
energy healing technique.

She said to me,
"Do you know Hospice Society?"


She said,
"Hospice is a facility for people who at the end of the life. They support
people who are dying, and their families." ... Support the people who are dying?  I love that idea !

So, I went crazy to research about Hospice society. I found it very fascinating that
there is a organization that support people to have a peaceful death.

By the way,
I am a firm believer of reincarnation. I know death is not the end of the life.
Because, I feel spirits around me all the time, I sense they are trying to connect
with us (alive people), I hear sounds they are trying to make. So I know they are
not dead, but still alive in a different form.

I just don't "see" them.
I remember as a child, I was so scared of ghosts, even though I had never
seen it before.


I always bring my little hands in prayer position and look up the sky and begged,

"God and Buddha, please don't give me a gift of being able to see ghost and spirits!"

Anyways,
I just love the idea of supporting people who are dying, so their transition
to the death will be peaceful. I believe peaceful death will bring a peaceful birth
as our life is just like a season.

I believe, Birth-youth-older-death is the cycle of the life, it repeats and continues.

I also think, it doesn't have to start with Birth. It can be Older-death-birth-youth.
It could be death-birth-youth-older. In other words, we can start our life anytime.

That means, we can reset our life anytime.

I don't remember when I started to think this way, but probably from Buddhist monks teaching through many funerals and memorial service that I have attended...

So, this is just the beginning of how I ended up volunteering with Hospice Society....

Not so exciting story, but I still love writing about it!

Posted by Mari Okazaki at 00:06 No comments: