I just know, because I see the result that Reiki brings to those people who received Reiki treatments.


Only thing I do is place my hands, or gaze at or blow on the problem area, and it will do wonders, and anyone can do it !!!


People who learn Jikiden Reiki with me often share their personal stories with me, and I am always inspired by those stories and make me want to do even more Reiki !


Here are some of the recent story of the wonder of Reiki treatment.


"On Good Friday, I was picking up my daughter Kim and my granddaughter Mia to take them to my house for a visit.......
While Kim was packing, she accidentally knock down a large ceramic bowl from the top shelf of her closet, and it landed on her foot!.....she was calling out in pain and thought it might be broken!  She asked me to get ice, but I decided to do Reiki instead.  I looked at it and blew on it, a couple of times and then applied my left hand to the bottom of her foot and my right hand to the top of her foot.....She said my bottom hand felt warm and the top hand felt cool....which was very soothing. I was sure I would have to keep my hand there for an hour!....but, because my grandaughter was bugging us to get gonig to Nana's house....after less than 10 minutes, I took my hand away and Kim said the pain was gone!
We went to my house and were so busy, that I forgot to ask her about it until the next day.  when she showed me her foot, there was no mark and no bruise!"

and another story from same lady,

"Just over a week ago my husband Ken was complaining of an ear-ache.  We had a busy schedule and I was unable to do the Reiki until late at night when we were both very tired.  I was so tired, that I laid down next to him and placed my right hand over his left ear.  The lights were out, and I was trying to stay awake.  Within about 5 minutes, I heard an unusual noise?( gurgling?)....I had no idea where it came from,  but after a few seconds, I asked Ken  "What was that noise?"  He said  " Don't take your hand away,  that is the pressure in my ear releasing!"  So I left my hand there until I started to drift off, then I gave him a longer treatment the next day!.....He went to the doctor's a few days later and his ear was completely fine!  Needless to say, he is now a believer!
Now I want everyone in my family to learn Reiki!!!! "

This is a great example that
"Anyone can do Reiki. "

I learned Reiki in 2005, about 6 years ago.  As much as I do Reiki treatment for other people, I do Reiki for my family just about everyday.   Cuts, bruises, burns, cough, sneeze, tummy ache, ear ache, etc are everyday events for my family with three little children.  Reiki comes VERY handy. 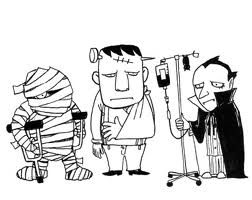 This is my recent story of Reiki.


My daughter smashed her fore head against a corner of a furniture while she was playing with brothers and friends.  Head and the shin are the body parts that is easy to swell with an impact. If there is a cut, it won't swell so much, but if there is no cut, it swells instantly with a big bump.


Her fore head swelled up quite a bit, and she was scared when she looked at herself in the mirror.  I spend for over 30minutes by blowing and gazing the bump, and it was amazing to see the swell was going down to virtually nothing.


My other children looked at her after 30minutes and they said,
"Wow, Reiki is really working.  I can hardly see where the bump is!" 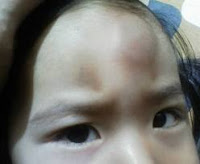 Well, I have to say her bump is quite big now as she keeps smashing the bump
against the wall while she is sleeping, or accidentally scratch too hard...


Honestly, I just want everyone, especially parents with young children and people who have sick family member, to have Reiki in their own hands so then the treatments are right there in their home.


I think it is great I don't have to rely on doctors every single physical and mental problem and do Reiki treatments at home, anytime, anywhere.


Yes, we do need doctors and their knowledge and intelligence are important in certain situation.

But there are so many things that we can do ourselves before we started to rely on doctors.


If we can take care of ourselves to the certain levels, and knowing our own body's message and listen to the message, the hospital wouldn't be too crowded, the doctors and nurses do not have to be stressed out.


Also, the unnecessary garbage that is produced from the hospital will be lessen.

I think it is very important that we educate ourselves
to the certain levels to be self efficient.
Most of all, though,
Reiki gives us complete peace in mind....